Coincidence, or Something Bigger?

What do you call it when you meet someone new and then realize you have shared some very similar circumstances in life? Or when someone who you have known for awhile reveals something that you never knew you had in common? That is usually when we exclaim,"Wow, what a coincidence!" I am always fascinated when I find these unexpected connections.  There are times when living far away from "home" that you long for some connection to something that is familiar and comfortable to you. After several moves around the country, I am beyond expecting that I will cross paths with someone I know from the past or someone with whom I will share meaningful geographical connections.  But, when it happens (and thankfully it does) those small ties to home can feel like a warm hug- a real gift out of nowhere! On a bigger scale, maybe we all enjoy these moments because it reminds us that we are not alone in some vast random world, but that we all share connections and relationships, both known and unknown, across time and space. 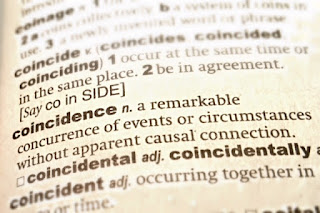 This past weekend I had a glimpse of the power of coincidence. My husband and I had the opportunity to meet my daughter's college roommate and her parents.  About a year ago, Claire did what so many prospective college students do when they are interested in a school- she joined the Facebook group where the students meet each other and start to look for potential roommates.  She fairly quickly narrowed in on Lizzy.  I don't know what their online conversations were like or what they "talked" about, but they obviously saw something in each other that they liked.  One interesting fact that my daughter shared about  Lizzy was that she was from St. Louis where we had previously lived. "What a coincidence! It's a small world!" we said.  What were the chances that a girl from NJ (previously from Missouri, born in Ohio) would meet up with a girl from Missouri in a school in Ohio? We took that coincidence as a positive sign.

As we got to know Lizzy and her parents, the coincidences started to pile up. First of all, both girls loved the same sorority during rush and were fortunate to get bids to the same house. We learned that both of Lizzy's parents went to Purdue University just as we had.  Her dad had lived in the same dorm as we did, and her mother lived in the dorm next door.  Both of Lizzy's parents were also from Indiana just like us.  Before they moved to St. Louis, they had previously lived in Zionsville, IN which just happens to be the town where we were married!  Both of us had two children the same ages. We shook our heads at the coincidences. We had A LOT in common!

After I thought about the number of similarities, I wondered how it could have possibly been a random accident that Claire and Lizzy chose each other.  Maybe they shared similar traits of people born to midwestern parents.  Maybe they had a similar sense of who they are based on some commonality of living in St. Louis.  Maybe our Purdue-ness as parents had somehow propelled them to Ohio State and to each other! Maybe there were forces at work beyond those that we can reasonably understand.  There is no way to KNOW for sure, so we chalk it up to an amazing set of coincidences.  But it sure seems like it was part of the plan. 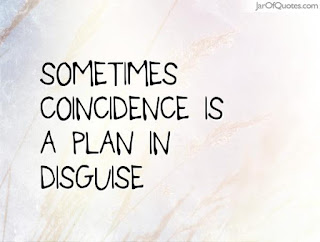 Several years ago, we experienced another major coincidence. A year after we moved into our home in St. Louis, our next door neighbors decided to sell their home ( I don't think it was because of us!). One day we noticed that a nice family was touring the property.  We were outside flying kites with our girls when their two children came over and joined in.  We were excited by the prospect of a family near our age and child status moving in next door.  At some point, the parents walked over and introduced themselves and started asking us questions about the neighborhood.  In addition to a positive and friendly first impression, we quickly learned that they were moving from Houston and that the dad worked in Aerospace.  What a coincidence! We had also lived in Houston and worked in Aerospace.  Then we narrowed down where they had lived and we then realized that we had lived in the same town. Further digging let us discover that we lived less than a mile apart in the same neighborhood! We knew some of the same people. We later learned that they were both from Pennslyvania originally. So were my parents! We shared the same somewhat unusual middle name. One set of our parents had the same birthday. What are the chances?!?! Thankfully they did buy the home and became some of our closest friends.  So the question remains, was that really "just a coincidence"?

In this case, I have no doubt that our meeting was orchestrated.  This was not a random event, we were clearly put in each other's lives for a reason. It was most definitely a God thing. But what about the smaller coincidences, what do they mean?  I have always found that a coincidence is more than just a conversation starter, it is an opener.  It gives you an opening into who a person is, and how you are already connected. The coincidence provides a way to fast track the conversation/relationship and immediately move to the common experiences that you know you share. It makes me stop and pay extra attention because it feels important. How could this person who is seemingly in my life so randomly share so many connections with me?  My gut says, "Pay attention, look closer! This is not an accident!" 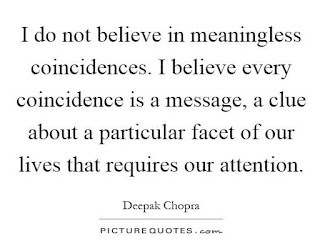 Certainly, not every coincidence leads to long-term friendships or relationships, nor should they.  But it is interesting to note the circumstances in which you experienced the coincidence.  Was it during a time of transition? Were you feeling lonely? Were you feeling a little homesick? Were you searching for something new? Were you in a period of discovery?  The timing of the coincidence could be the key to its importance.  Maybe it was meant to comfort, to provide a sense of connection, to bring a new person into your life, to offer you confirmation about something you've been thinking of, or to show you that the world is smaller and friendlier than you think. Perhaps the universe was trying to send you a message! Whether you choose to ascribe meaning to coincidences or not, I hope you can at least acknowledge the wonder that comes at that moment when you realize the unknown connection.   Pay attention when the universe seems to speak to you!