Into Every Life Some Rain Must Fall

The clouds started building as they have so often in recent weeks.  Dark storm clouds piled up on the horizon threatening rain.  I tracked the changing conditions from my vantage point of the salon chair. Each time the chair spun me around, the darkness grew more pronounced. Thunder rumbled and finally, the clouds released what they had been threatening.  A deluge of rain turned the air almost white.  Torrents of rain created instant ponds and a flowing river through the parking lot.  I would not be leaving anytime soon so I welcomed the time to visit with my hair stylist. As we watched and waited, the rain continued its assault on the parking lot and the water swirled and rushed around the cars.  And then just as suddenly as the rain had started, it stopped.  The skies started clearing and the parking lot became passable once again.  It was safe for me to go outside. 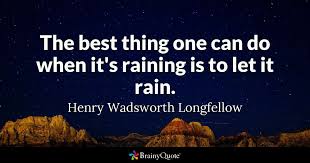 As I drove home, I was surprised by how quickly the rainwater seemed to dissipate. The overwhelming rain of thirty minutes ago was already finding its way. Small streams of water flowed along the roadways, drainage ditches were already doing their job of whisking away the water.  The pathways of water, both natural and manmade, were amazingly effective. The process was so good that I started to wonder if it had rained as hard as I thought where I was driving.  But then I would hit an epic puddle that would demand that I slow down and proceed with caution.  Occasionally, I would hit a puddle going a little faster than I wanted to and I would underestimate the depth.  The great wave of water would splash up onto my windshield obscuring my vision for a few seconds.  Sometimes other cars would be the culprit.  The stream of water would hit my windshield with a startling thud.  By the time I got home, the sun had made an appearance.  The remaining signs of rain were subtle, puddles and the sound of draining water, but nothing as significant as I would have expected after such a storm.

As I observed the rain and its aftermath, I sensed a deeper meaning. My brain and my heart were making deeper connections. The rainstorm seemed to be an obvious metaphor for my grief and for other difficulties. And oddly, it was comforting. 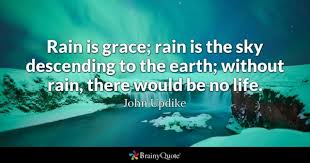 The initial wave of grief is overwhelming and stops you in your tracks much like the deluge of rain.

Sometimes you need to stop and seek shelter for a while until conditions improve.

Friends can make a difficult moment so much better.

Just as rainwater finds its way, so does life.  Life goes on whether you feel ready or not.

The pathways of water are much like the routines of life. They channel your grief and keep you moving along.

Just because there isn't any obvious storm damage doesn't mean a storm didn't happen. Although things may look relatively normal to others, that image isn't always consistent with how you feel inside.

And thankfully, just as the sun comes out unexpectedly after a storm, so does the light return again to your life.  It may not be consistent, and it may come and go, but each time the light appears it is an encouragement that life will be normal again. 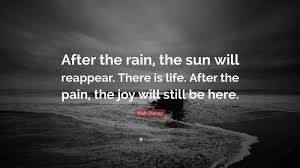 There have been a lot of storms this year, both actual and metaphorical.  I am looking forward to a break from the rain and some much-needed peace. I am hopeful that we will see an extended period of sunshine, but I can already see a few clouds forming on the horizon. Time will tell whether or not they will produce new storms or just some passing showers.  In either case, I hope I continue to learn and grow from the experiences. And always keep looking for the sun!


Behind the clouds is the sun still shining;
Thy fate is the common fate of all,
Into each life some rain must fall."
Henry Wadsworth Longfellow