After getting a mammogram this week, breasts are on my mind- - specifically, the strange and complicated relationship women have with their breasts!  It's an unusual thing to write about, but I’m going to give it a shot. I can only imagine what will come up on my computer after searching for breast related images :-0!

As women, we have been given this incredible machine of a body that does amazing things, but it is a body that also changes a lot over time.  Can you remember being young (pre-boobs) and thinking that this was the carefree body you were going to have forever?  Then one day, something started to change.  Officially the term was "budding", but more practically it meant that it was time for a string of camisoles, undershirts, tank tops, or the (super embarrassing) training bra.  It was time to cover up because our bodies were starting to change.  It is around this point that many young girls became confused about how to feel about their bodies.  Is this a good thing, and if so, why do I have to spend so much time covering it up??

At some point, those "buds" actually became real breasts and nothing but a real bra would do.  For some girls, this development happened too early and they were the only ones who had them.  For others, it happened late and they were certain they were the only ones who didn't.  Some are still waiting for their breasts to come! And for sure, whatever size you had; it was never quite right.  Too big, too small, wrong shape, wrong structure.  There was a lot of attention paid to something that was completely out of your control, and not all of that attention was welcome.  Why was this a thing that we were judged on? Why did the boys seem so fascinated? And what was up with all of the bra strap snapping in middle school?!?

As time went on, we became used to what we had.  We tried to find bras that fit our particular shape and size and were thankful for inventions like the Miracle Bra, the T-shirt bra, or the Minimizer.  We learned to dress our body type and figure out what clothes flattered our large breasts, or made the most out of our small ones.  Although it was still more work than it needed to be, (why do I have to pack a regular bra, sports bra, strapless bra, and t-back bra for one vacation?!?) we made peace with what we had.  Apparently, this was the body we would have forever. 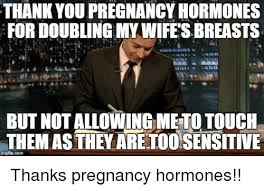 Every woman has a different experience with pregnancy, but for some their breasts were the first to say, "Hey look at us, we're pregnant!".  One morning I seemingly woke up with these oddly large and ultra sensitive vessels attached to my chest. I felt no connection to them.  It was as if aliens had landed on my chest and set up shop. They were sore, swollen, and made me feel 3 times my normal body size.   What the heck was going on?   Ah yes, thank you pregnancy hormones!

Turned out that all of that pregnancy fun was just preparing our body for the next step- nursing. If we thought the pregnancy boobs were out of this world, then we had no idea what the nursing boobs would be like!  Enormously full one minute and completely deflated the next, there was no way to have any real idea of what they would look like from hour to hour.  I remember being measured and fitted for a bridesmaid dress during this time.  When I returned for the second fitting, the seamstress was like "No, no, no! Something is wrong! Your breasts were an inch higher when I measured you last time."  Yes lady, I know. I am a human freak show. There is no telling where they will be next. But, I am an amazing human freak show who has the wonderful ability to feed my babies :-). Although appreciative of the miracle, I was relieved that this wouldn't be the body I had forever.

After the baby years were in the past and we had been pregnant with and nursed all the babies we had been blessed with, we realized that our breasts were not what they once were.  The oddities that we happily put up with because we knew they were serving a greater purpose were now mostly gone, as was the greater purpose.  In some cases, we felt our breasts were gone too! Our boobs returned to normal, mere mortal breast status and then we had to get to know them again.  Not as big, not as firm, not as high, not as perky; whatever the case was we had to get to know them all over again.  We started to look for new bras and tops with things like "structure" and "support".  We loved the word "engineered" when it came to our underpinnings and our swimwear. We started to have a new relationship with our new breasts. We were pretty sure that this would be the body we would have forever.

Around this time, we had the first of our friends to be shockingly diagnosed with breast cancer.  We considered ourselves way too young to have this happen. We watched as she made the decision- sometimes voluntary, sometimes not- to remove her breasts to save her life.  We supported her decision. We heard her joke about how it was a no-brainer and how she looked forward to her post-cancer reconstruction.  A boob job we called it, just to make all of us feel better. 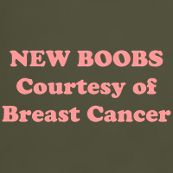 We were prompted by age or circumstance to get our first mammogram and complete the family history chart of cancer.  Somehow we never realized there was so much cancer in our families.  We learned about the risk factors for breast cancer and the BRCA gene and made decisions with our doctors about genetic testing and risk level and how often we should be monitored.  Meanwhile, another friend found a lump and was diagnosed with breast cancer.  She was "lucky" in that she would only  need a portion of her breast removed.  We rejoiced at the good news and were reminded that we really needed to do those monthly exams.

Time went on, a mother was diagnosed, someone you knew died, another friend went through chemotherapy. mastectomies were done.  We saw what the scars looked like.  We attempted to lessen the discomfort of chemo and radiation. We witnessed the pain in reconstruction.  We saw the incredible bravery and resilience of our friends and family members. We learned that the mammogram was our friend, early detection was key, and we started to pay more attention to what was happening in our breasts.

Then the day came when they saw something on your mammogram, and they wanted a closer look.  You sat there staring at the image on the ultrasound while you waited for the doctor to come in. You looked at the blob on the screen trying to determine if it was friend or foe. You had been through this process enough to know that this wasn't normal.  You started to make those special deals with God that you only make during desperate moments.  Remove whatever it is, take both of my breasts, I don't need them- just  keep me alive!  The breasts- your breasts- that had been a focal point to so much of your life became disposable in one scary moment in an overheated little waiting room.  As you waited days for biopsy results, you continued to make peace with the idea that your breasts were history.  You started imaging how you would look without them. You and your friends joked about the perky C cups you were going to get when you got your new boobs.

You were lucky this time, all was clear.  Meanwhile, another friend was diagnosed with breast cancer. 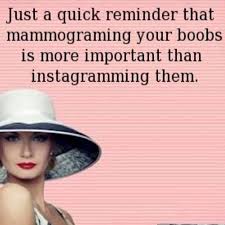 So the relationship with your breasts changed again.  Yes, we still fussed about the size and shape.  We added in the issue of gravity and we searched high and low for bras and swimsuits with even more advanced engineering. We may have even considered surgery to add or subtract or lift what we had.  But now we knew that healthy breasts were a gift-- but possibly a gift with an expiration date.  Sure, I might have been lucky this year but was it only a matter of time before I was next? It turned into a strange relationship where you tried to be thankful and appreciative of a body part while you also accepted that it might have to removed someday.

Meanwhile, another friend waited on a biopsy.

This new relationship with your breasts can be a difficult one. Some women have great stress about it and others take it in stride.  Some avoid mammograms for fear that they may find something.  Others do monthly exams meticulously because they want to be the first to find it if something is there.   Regardless of how calmly or anxiously you walk into your mammogram, there is at least one tiny moment in time where you will silently consider the fact that this may be the time when they find something. And if they do, you will gladly trade your breasts for your life--if that is an option, and you really hope it is.  I can't think of another situation where the choice seems so stark and so clear.

So what do we do? We continue to joke about the toll that time and gravity is taking on our breasts.  We search high and low for the perfect bra.  We try to be better about monthly self exams. We go get our yearly mammograms. We continue to wear our pink ribbons and t-shirts, and we walk in breast cancer walks, and we contribute to breast cancer research, and we support our sisters who have been diagnosed,  and we celebrate the advances, and we pray for a cure, and we live.  We live with our love 'em or hate 'em, too big or too small, too high or too low, crazy, non-perfect breasts because that is the only option we have. And we still think, and now hope, that this will be the body that we will have forever. 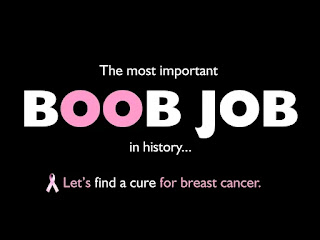 This post is dedicated to all of my dear friends and family members who have battled breast cancer. Thank you for showing me what bravery looks like.