Is It Enough Yet?

Whenever there is a mass shooting, I feel like I have been punched in the gut.  That sick feeling alternates from pain in my chest to churning in my stomach.  It is as physical as it is emotional. This most recent shooting in Dayton, OH coming so quickly on the heels of the El Paso shooting felt sickeningly worse.  Our connections to Dayton run deep. Dayton was our home for 8 happy years.  We brought our baby girls into the world in Dayton, our older daughter born less than a mile from where the shooting took place. My husband and I have hung out in the Oregon District.  This attack felt intensely personal.

The horror of these shootings is that even as we are heartbroken at the loss of life and the loss of innocence, we secretly look for ways to fool ourselves into thinking that it couldn't happen to us. It is our defense against the terror of these random acts of violence. We tell ourselves that there is no way it could happen in MY school, or MY community as if these terrible tragedies only target certain people in designated parts of the country. If the last 30 years has taught us anything (and it appears that it hasn't), it is that no one and no place is immune.

It is difficult for me to remember my adult life without the awareness of these mass shootings. When I was younger, I had a vague awareness of some post office shootings and a terrible McDonald's shooting, but it wasn't part of my daily thoughts. The first one I vividly remember happened in 1991 in a Luby's restaurant in Killeen, Texas. A man drove his truck into a crowded Luby's and started randomly shooting. He killed 23 people and injured 27 others in an unspeakable attack. I lived in Houston, Texas at the time and ate at a Luby's Cafeteria quite often.  There wasn't a time that I didn't think about the shooting when I walked in the door of that restaurant. It led to some bouts of anxiety.  I worked in a large mall at the time and whenever there was a loud noise or sudden movement of people, I had a surge of panic.  I started paying more attention to exit signs and looking for places to hide should I need to.

By the time Columbine unfolded in 1999 (13 killed), we were all growing increasingly familiar with the phenomenon of public shootings, but not the horror of our schools being the targets. It was inconceivable that the safe space of our schools had been pierced in such a vivid, nightmarish, and well planned out way.  More followed and we realized that our schools would never be the same. 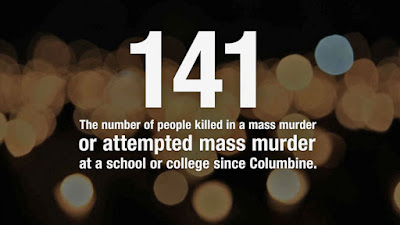 Then the Virginia Tech massacre happened in 2007 (32 killed). Suddenly the feeling of college as a safe and carefree place was also now in question.  Sure, we could try to rationalize it as the isolated acts of a madman (which it was), but it was also a chipping away of the accepted norms of our lives. The Aurora theater shooting happened in 2012 (12 killed) and as we mourned all the victims, we also mourned the loss of one more place where we couldn't assume we were safe. I recall talking to my daughters about looking for exits, paying attention to their surroundings, and running away to avoid being shot.  By then, they were very accustomed to intruder and active shooter drills at school.  These drills were sadly as commonplace as the fire and tornado drills of our youth.

And then, good Lord-- Sandy Hook happened later that year.  As I was out enjoying a sunny day of Christmas shopping, 27 people (including 20 heartbreakingly young children) were being slaughtered. I cried in my van when I heard the initial news reports and then I sobbed as the more vivid details emerged.  I was gutted for days. How could this possibly happen to our youngest and most vulnerable of students? Hadn't schools been "hardened" and made safe with cameras, controlled access points, locked doors, and intruder drills? I pictured those innocent young faces and the brave school personnel who did their best to stop the attack, but who were no match to the sick mind and gunpower of one individual with a twisted purpose.  I knew in my heart that if any good was to come from this unimaginable horror, it would be that we would finally act and do something concrete to stop the madness.  Regrettably, we did not...

The assault continued-
San Bernadino 2015 (14 killed),
Charleston Church shooting 2015 (9 killed),
Pulse Nightclub 2016 (49 killed),
Las Vegas Strip 2017 (58 killed),
Texas First Baptist Church 2017 (26 killed),
Parkland school shooting 2018 (17 killed),
Santa Fe High School 2018 (10 killed),
Tree of Life synagogue (11 killed),
Thousand Oaks nightclub 2018 (12 killed),
Virginia Beach municipal building 2019 (12 killed),
Gilroy Garlic Festival (3 killed),
and finally the most recent racially-motivated shootings at a Walmart in El Paso (22 killed).
This isn't even close to an exhaustive list.  There are so many more, and yet still no concrete action. It is frustrating, disheartening, and demoralizing.  I cannot begin to imagine how it must feel to be a family member of one of the victims- how devastating to think that your son or daughter died in vain.

So since 1991, we have "learned" that there is no such thing as a safe place.  Our restaurants, movie theaters, elementary schools, middle schools, high schools, universities, workplaces, night clubs, places of worship, music festivals, food festivals, Walmarts, grocery store, nursing homes, vacation destinations, hotels, air force bases, post offices, and pretty much any place where there are people are ALL vulnerable.  This shield that I imagined protecting me does not exist. There is no target too big or too small, no space off-limits, no community untouched. And while I understand that concept intellectually, in my heart I still thought that maybe there was a bubble where this could not happen.  Watching the scene unfold in Dayton, a place of such fond memories and kind people, shattered whatever tiny piece of my heart that still believed in safe places. As the shootings have chipped away at our sense of security, the inaction that followed chipped away at our trust and belief in our fellow citizens and our government to make the shootings stop.

We can continue to argue about the causes of these horrible shootings- mental health, video games, laws, prayers, access to guns, types of guns, exposure to violence- and do nothing. We can parse words about which shootings are really mass shootings, and argue about which party is most responsible. We can continue to get lost in the "they are coming for our guns" argument. We can allow our schools and communities to be increasingly terrorized by the possibility of a mass shooting and we can watch people continue to die while we offer our well-meaning vigils, thoughts, and prayers. Or, we can do something, ANYTHING that might help.  Few major problems have one singular solution. This one is no different.  Every one of these victims and their family members deserve our deepest sympathies, our most earnest thoughts and prayers, and our collective action to make sure this never happens again.