My mom turned 84 a little over a month ago. It was a milestone worth celebrating. When I visited with her in November I sadly thought she had a 50/50 chance of still being alive by April. When I saw her in March, I thought the odds had gotten even worse. Truth be told, when she was diagnosed with breast cancer 13 years ago only weeks after my dad had died, I never thought she would live to be 84.  I didn't necessarily think she would die from the disease, but just from the combined trauma of it all. But somehow she persevered and has continued to do so, overcoming obstacles and fighting to live on her own until just a few weeks ago. Her extraordinarily strong will may have finally met its match.

Like many mother and daughters, our relationship has been complicated. Neither one of us met the expectation that we had of each other.  She wanted a daughter who lived close to her, who could be her go-to girlfriend and support person- unfortunately, I never lived closer than 1000 miles away. I wanted my mother to be an active, engaged part of my adult life. Instead, because she didn't like to travel she visited me only a handful of times during my almost 30-year marriage.  Sometimes expectations are hard to let go of. But given the obstacles, we have pressed ahead as mothers and daughters do. We tried to bridge the distance- physical and otherwise- as best we could. Sometimes we succeeded and sometimes we failed.

A few weeks ago I got the call. The declining health that we had been so concerned about had finally come to a head. She had long been ignoring her doctor's concerns and had rejected any testing or treatment that would confirm a diagnosis. Calls ensued, my brother took the necessary action, and ultimately the decision was made to start hospice care.  I flew down a few days later to help and to spend time with my mom. She was frail and weaker than she had been even a month earlier and clearly needed help. I tried to do what I could. In a flurry of activity, we located important papers, made decisions on care, consulted with medical professionals, talked to the insurance company, arranged in-home care, made her house easier to use, cleaned, shopped, cooked, and I took my turn as primary caregiver mode. 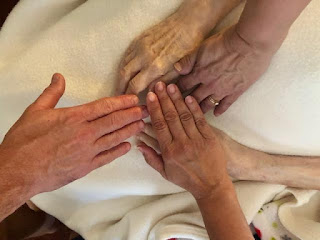 There is no manual to walk you through this process. It is a titanic shift in roles. My focus on my mom was not unlike that of an infant or toddler- feeding her when she was hungry, helping her with her bathroom needs, making sure she didn’t fall, assisting with bathing and dressing.  I slept on a couch in the room with her so I could be there if she needed anything.  I slept with one eye and one ear open just as new mothers do. Somehow we found humor and light in unusual places because that’s what you have to do to survive. There were dark moments, overwhelming times in the middle of the night where I didn't think I could do it. Well timed text messages and emails offered encouragement.  Talking helped. My brother and I talked a lot about her care but we also took time to share old stories and talk about family nicknames and folklore, and we laughed. My sister arrived and we curled up in bed and talked and planned and laughed and shook our heads at the sadness of all of it.  I marvel at the resilience of the human spirit and the ability to do that which you never thought yourself capable of doing.

As we figured out 24-hour care for her and saw some stability in her physical condition; we started to pay more attention to some cognitive changes. There had been some previous behaviors that were on our radar- stories that didn’t seem completely true, increased difficulty making decisions and managing her checkbook, incorrectly reading social cues. Perhaps because we were more focused on her physical decline, we didn’t really register the mental decline as significant. It was easy to explain it all away. Once I was there, I noted a few unusual changes in her behavior such as no longer watching tv or being extra sensitive to lights and sounds. I started noticing some periods of confusion. They would be most apparent after sleeping. She would have difficulty separating dreams from reality, but only for a short time, and given the amount of time she was sleeping it made sense to me that she would be confused. As I said, it is much easier to explain it away than to accept.

At some point, my mom started asking questions. At first, I thought she was being philosophical- "how did I get here, what’s wrong with me"- but I soon realized that she was being literal. While these episodes were not the norm, I could see that they were happening more often than I had originally thought. I could almost see the clouds start to form in her mind. She would start blinking rapidly as if to clear her vision from whatever fog was descending on her brain. As sad as the physical decline had been, it was nothing compared to the heartbreak of the mental decline. It is perhaps our wishful thinking to assume that the patient is somehow shielded from the horror of this by virtue of their own fogginess. Perhaps in time, that will be true, but what I witnessed was someone who was keenly aware that something was terribly wrong but who couldn't quite get her brain to tell her what it was. When she started to say "I want out of here", she was not saying (as I had tried to convince myself) she wanted to go outside. I imagine she was saying she wanted out of this time and place where her brain was failing her at a rate quicker than her body. There is nothing to be done in those moments other than to reassure and try to explain what was happening. Even in the best of circumstances, it would be difficult to explain how a person went from living independently to needing 24/7 care in a matter of days, but adding the layer of mental uncertainty made it infinitely more difficult to explain.

We are now in a race against time. We don’t know when the race will end. We don’t know if the physical decline will outpace the mental decline. In the end, there is little I can do besides provide her with good quality care and pray for her. I pray that God will be merciful, even as I know that millions of other families have prayed that same prayer without seeing the result they hope for. I do it anyway because it is the most and the least that I can do. In reality, we are already grieving. Even though my mom is still alive, we know what is coming and we can already feel the loss of her slipping away.  We understand that the best of times have already passed, and we grieve for what will never be. We are thankful for what we still have, but are broken-hearted at what we have already lost. We will continue on the long journey to acceptance. Thank you to those who are accompanying us with your prayers and words of encouragement. They are greatly appreciated.