Listening has been on my mind lately- specifically I've been wondering if we have lost the ability to truly listen to others.  Do we remember how to listen to someone carefully for understanding and without predetermination?  We all want to be, but also need to be listened to.  It is a basic human desire to be heard and understood. And when we do not feel like we are being heard, what happens? We tend to make our point louder and more forcefully, or we shut down completely.  Neither action is helpful if we are to communicate with each other effectively. This pattern seems to happen more each day and it concerns me. 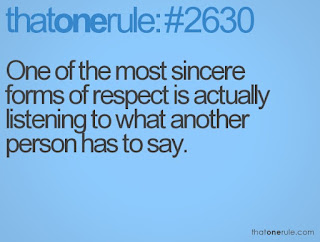 A few weeks ago I witnessed something that very clearly illustrated this problem. While getting gas, I noticed a woman drive up to the air compressor to put air in her tires.  As I watched her put her money in the air pump, I thought to myself how frustrating it was that gas stations charge for air.  A few moments later, she walked up to the employee who was pumping my gas (NJ perk :-)) and told him that she was having problems with the air.  She said she put money into the machine, but could not get air to come out.  She was concerned that they may be a problem.  The employee immediately responded that she should put more money in and try again. She was confused by his response and told him again that she was concerned that there was a problem with the pump.  He continued to insist that there was not a problem with the pump and that she should put more money in. After a few back and forths, it became clear that he thought she was trying to scam him and had not paid for the air.  At that point, I jumped in to let him know that I saw her pay and had watched her put the money in.  It did not matter, he continued to stick to his point and she continued to get more and more frustrated. Tempers flared and voices raised.

"I don't understand, you aren't listening to me!  Why would I put more money in a pump that just took my money? What kind of customer service is this? I just need to get some air!"

She was right, he was not listening to her. He was not hearing what she was saying.  He was not trying to solve the problem.  He had already decided that she was trying to scam him and nothing she could say would change his mind. How frustrating! Although I had to drive away before I could hear the conclusion, I would bet that she left without resolution. 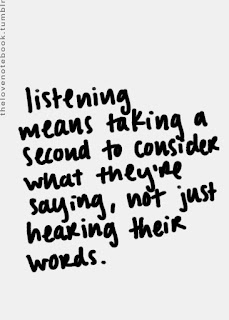 This experience has stayed with me.  I could feel her frustration. My heart rate increased, my face felt hot.  I also saw it as indicative of a bigger problem.  It seems like we aren't doing a very good job of listening to each other anymore. Have you been in a situation like this where you felt like someone was not listening to you? Sure, they may have heard the words, but they were not acknowledging the meaning behind them.

Why is this such a problem? A few thoughts:

We are in a hurry, so we don't take the time to really listen.
We quickly determine what we think the person is saying.
We just as quickly decide if we think they are right or wrong.
We don't take time to truly consider new information or opinions.
We focus so much on our comeback that we miss the subtleties of what the person is saying.
We want to figure out who to blame or how to fix it, but not acknowledge the feelings.
We have a hard time being empathetic if it is not something we have personally experienced.
We just don't want to listen :-(. 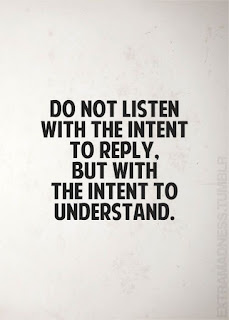 I think about how differently the exchange at the gas station would have gone if the attendant had really listened.  What if he had said, "It sounds like there is a problem. Let me take a look. Maybe I can help." She would have felt heard and respected and understood, and most importantly, helped! If he had responded with empathy, she would not have raised her voice.  She wouldn't have needed to. 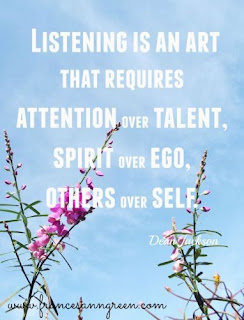 There are lessons to be learned from this exchange.
We aren't listening to each other.
We just keep getting louder and more over the top trying to make our point and trying to be heard.
We need to do better both in person and online.

I would be remiss if I didn't point out that listening is always easier when interacting with someone who is speaking responsibly (although that may not always be the case).  We must speak with honesty and respect.  We have to remember that words have significant power and their echoes continue long after the words leave our mouths. We must speak with gentleness, free of insults and judgment that can stop us from hearing differing thoughts or opinions.  Each of us can continue to learn and grow from each other's perspectives.  We won't always agree, but listening with understanding can bring us closer.  We can't help each other if we don't understand each other.

Join me in trying to be a better listener.  Here are a few tips to get started:
https://www.lifehack.org/577203/the-purpose-listening-understand-not-reply 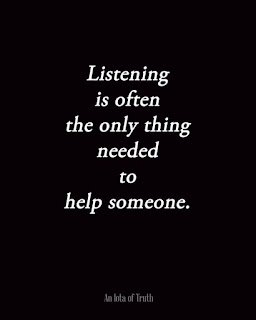